In many societies the festivities that are celebrated at certain dates of the year, are to commemorate events that happened in the past. So celebrations are to keep them alive. One clear examples of this is the Diablada de Píllaro.

Píllaro, a city characterized by large indigenous uprisings, has caused all its historical information to disappear. In the uprising in 1898, where the natives threw themselves on the city and the Municipality, in San Juan Square they started a bonfire and in it, they threw all the documents, old and of that time that  the Cabildo had. Valuable documents were reduced to ashes, thus losing the story of Píllaro. 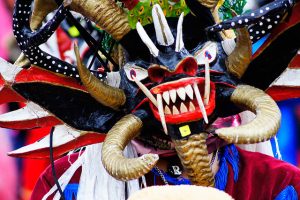 That is the reason there is no document that gives faith when the fest of the devils (Diablada de Píllaro) started. Several researchers have tried to find the true origin of the party, in which they give many interpretations depending on the people and the site where the research was done.

Some Interpretations of how the Diablada started

Source: Taken interviews to elder people who know much about this tradition. 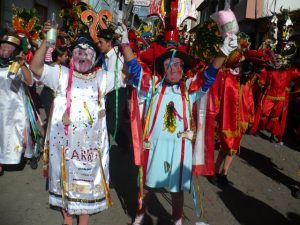 The Diablada de Píllaro has surpassed the community nucleus since groups of people from different communities, neighborhoods or hamlets, as well as from rural parishes, take part. The Diablos of Píllaro on their festivity that takes place from the first to the six of January of each year. Agglutinate to the Pillareño  town with the participation of men and women of different ages and social condition. There is no prohibition for anyone to disguise themselves as devil.

For the Diablada de Píllaro the comunities organize with several months of anticipation, to look for the band of musicians that will accompany to the dancers; and make the masks.

Each troupe of devils with their respective village band that come from the parishes and rural hamlets at noon to the center of Píllaro, must dance two laps around the central park, after that they go to the place of rest that the organizers requested with anticipation.

The Diablos de Píllaro are the popular characters of this party, who wear special attire whose work takes a lot of time and effort.  Animal´s horns and teeth adds the grace to the atisanally elaborated masks. Then painted, with  several colors highlighting the black and red.

Their clothing consists of multicolored clothes.

Many wear cloaks with different legends alluding the devil. Black sneakers, ¾ with golden fringes, skin color socks, blouse or red shirt, a cloak, a whip (acial), like intimidating the spectadors.

Parade dancing to the sound of a town band, following the rhythms of Sanjuanitos, Saltashpas tunes and Pasacalles. This comparsa ends with the Guarichas and Capariches.

Tradition tells that those who dress as devils must do it for 7 consecutive years, so that strange things do not happen to them. Like the well-known 7 steps that are part of the devil dancing ritual, this year (2017) was implemented 5 additional steps to this dance. 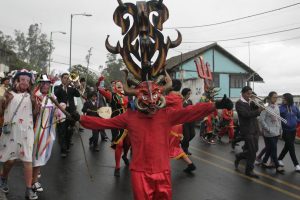 The components of the Diablada de Píllaro

El Cabecilla (the ringleader).- It is the person in charge of organizing in your community the participants, with a lot of time in advance.

The Capariche .- Goes before the comparsa, with a broom, sweeping the streets and the feet of the people who are watching. This character is in decline, because few people disguise themselves of that.

La Guaricha.-  A man or woman, with a white dress, a mesh mask, a hat, and a doll in his arms. They dance indifferently, dance with the spectators and giving them a glass of liquor.The doll represents a child, implying that he/she is a single mother and that the father of the child is the one who is watching.

La Banda.- The ones in charge of putting the rhythm of the dance, of them depends all the folklor that can show the comparsa. Each comparsa dances with its band, for that reason they are contracted with much anticipation.

Los Diablos.– They dance indifferently by the sides of the “Lineas”, every time the band stops singing the music, they shout “band” asking for music. Another one of their shouts is “achachay”, meaning that they have come out of hell and they feel cold.

All this takes place from January 1 to 6, and was declared an INTANGIBLE CULTURAL HERITAGE, in January 2009, by the Ministry of Culture.

Other “Diabladas” of the region 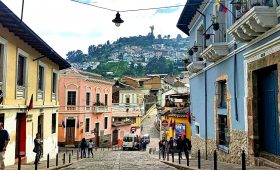 What is La Ronda street in Quito-Ecuador?